Once upon a time, I was a proud Ubuntu user. It was easy to install and easy to use. I was a Windows user before that: Ubuntu was feeling similar.

Months after month, my pride decreased as much as my annoyance increased. Ubuntu was letting me down:

I didn’t know better, so I stuck with it for years. One morning, fresh and motivated, I decided to upgrade my LTS version. Everything crashed. I couldn’t even start Ubuntu anymore. I tried to fix everything, but I had no clue about Linux at the time. Where to begin? What to do? The Ubuntu forums were not helpful, so I decided that it would take me less time reinstalling everything.

The bitterness filling my heart was unstoppable. Ubuntu, my old friend, let me down again, in a spectacular way.

Luckily enough, some months later, I had the pleasure to work with amazing developers who showed me how to build a very effective development environment.

My whole workflow shifted from there. I went from Ubuntu to Arch Linux, from Unity to i3, from PhpStorm to Neovim. After years of silent struggle, I finally had a scalable, stable, up-to-date, and very efficient system. I even wrote a bunch of scripts to install everything I need in one command line. Everything I needed to get things done was ready to serve my ambitions.

It was one of the best shift I did in my career. No more, no less. Why?

When I switched to the tools I use today, I really understood how important it is to have a good, efficient, and scalable development environment. I was feeling at home. It was finally a system which answers my needs, and not a system I was fighting against.

In this article we’ll speak about:

Interested? Come with me. I will introduce you to the fantastic world of a Mouseless Development Environment.

Your Best Friend, the Shell

In this article, I will refer to the shell pretty often. The most common are bash and Zsh; I use the second and I highly recommend it.

The Power of Plain Text

Command-line tools can be 235x faster than your Hadoop cluster.

I encourage you to use the shell as much as possible. It can be a bit tough at first, but the benefits are insane.

What about graphical interfaces on top of CLI applications? To me, it has serious disadvantages:

Things get confusing when you need to:

I have a real life example with sourcetree, a graphical interface for git. I worked with a junior developer who was using it without knowing how git was working. When problems popped up, it was difficult to know what command the GUI was calling under the hood. It was more frustrating than simply using the CLI git in the shell.

With the shell, you use mainly your keyboard. It might surprise some of you, but I try to avoid my mouse as much as possible. This is one of most important advice about efficiency I can give: keeping your hands on your keyboard might make you faster, but, more importantly, it will make you happier.

Here are some advantages of the mouseless approach:

If you want to know how to build a complete Mouseless Development Environment, it’s the subject of the book I’m writing.

Arch Linux has a lot of advantages compared to other Linux distribution.

What the heck is a rolling release system? The Arch Linux community update constantly everything for us, the users, from the obscure tool you’re the only one using to the Linux kernel. When you install a new program, you can be sure you have its latest version.

No need to ask yourself if you miss great features and bug fixes for your favorite tools. You’ll have the most up to date system you can find.

What about the applications available? The official repositories of Arch Linux are huge. You will find most of the time what you need there. If you don’t, you have access as well to the AUR (Arch User Repositories) where you can find everything else. I’m not exaggerating. After years using Arch Linux, the AUR still surprise me.

The only downside: the applications from the AUR are not always well tested. Proceed with cautions. It’s easy enough to check their build to know what’s happening if you install them, however.

When you install Arch Linux from scratch, you can choose exactly what application you want to install. Nothing you don’t want will pollute your hard disk. No useless applications will run in the background without your consent. You are the master of your destiny.

The community around Arch Linux is huge, too. They usually know what they are speaking about and don’t throw random shell commands on stack overflow without explanation whatsoever (I look at you, Ubuntu community).

Who needs stack overflow, anyway? The Arch Wiki is the best Linux wiki you can find. Again, this piece of art still surprise me today. There is everything in there.

Now, you might ask yourself: is Arch Linux stable? Will it crash every two weeks, letting you alone and helpless?

You will find many people preaching exactly that on The Internet. My advice? Don’t listen to them. I use it on a daily basis for 5 years now. It never crashed, or very early, when I was playing with the installation process.

If you are careful with the AUR, you can count on a very robust, lightweight, and customizable Linux distribution.

Sometimes pacman (not the yellow cheese addict to pills, but Arch Linux Package Manager) will ask you to do some manual modifications. It’s always documented on the official website of Arch Linux and can be solved in no time.

Manage Your Windows With i3

This is a very light, fast and simple-to-use windows manager. There are no fancy 3D effects with i3. Everything is made for you to be efficient and productive, without being visually repulsive.

With i3 you can create workspaces. They take a whole screen and can be moved from one screen to another. In these workspaces you can open one or multiple windows. They will embed your favorite applications.

Everything feels logical. I was able to use i3 efficiently two or three days after installing it the first time. Your muscle memory will work for you here to remember the keystrokes you need.

The configuration possibilities are huge. If you want to try it, I have an article which help you go through a basic i3 config, step by step. After that, you’ll understand i3 enough to customize it as much as you want.

Obviously the Arch Linux wiki has a good documentation about i3.

Urxvt, Tmux and Tmuxp: Your Terminal Is Now a Productivity Beast

Tmux in Urxvt with 4 panes open and two windows

I tried a bunch of terminal emulator and Urxvt was the best choice I found.

That being said, I’ve rarely more than two or three terminals open at the same time, thanks to Tmux. It’s a powerful terminal multiplexer (like screen on steroids) which allows you to:

Do I need to say that everything is manageable with your keyboard? You can use your mouse also, which is useful when you learn how to use it.

With tmuxp, you can even go further to automate your tmux sessions. Indeed, you can write a configuration file to open the windows and panes you want, and automatically launching applications in them.

Let say that in order for you to work on your new cool project (which will make you rich) you need to:

tmuxp allows you to automate all of that with one command line and a simple configuration file.

I wrote another article about tmux which explains the basic configuration you need to get started. You’ll learn as well everything to customize it for your needs.

An IDE Which Fits You

This IDE is Neovim, an incredible fork of Vim, coupled with the shell. Since Neovim and Vim are very similar, I’ll continue speaking about both of them using the word “Vim”.

This article was written in Neovim

Are you afraid? Don’t run away yet! Let me explain why you should really try to rethink everything you know about Vim.

I already write about Vim multiple time, so I’ll only summarize here why it’s great:

Still suspicious? The best way to find out if I’m totally crazy is to try it. As you might expect, I wrote this article for this exact purpose.

tig: on top the branch hierarchy, at the bottom, you can see every change made

I think git is very easy to use in the shell for the most common tasks we all do every day. The decisions made about the user experience are a bit weird sometimes, but it’s better to be aware of them from the beginning on.

Basically, you need on a daily basis to use:

Do you really need a whole GUI for that?

The first tool I use with Git is tig. It allows you to go through the hierarchy of git branches and display the details of each commit.

The second one is git-so-fancy. It displays git diff in a very readable way in your terminal. I always use it to verify what I did before doing a commit.

These tools are both available in the official Arch Linux repositories.

Better CLI for MySQL and PostgreSQL

If you need a quick and practical interface in the shell to interact with your database, I would recommend mycli for mysql and pgcli for PostgreSql.

These tools are similar MySQL and PostgreSql CLIs, but on steroids:

In order to install them on Arch Linux you’ll need to fetch them from the AUR.

Do I surprise you if I tell you that I wrote a whole article how to install and use efficiently mycli?

Are You Ready To Be A Mouseless Developer? 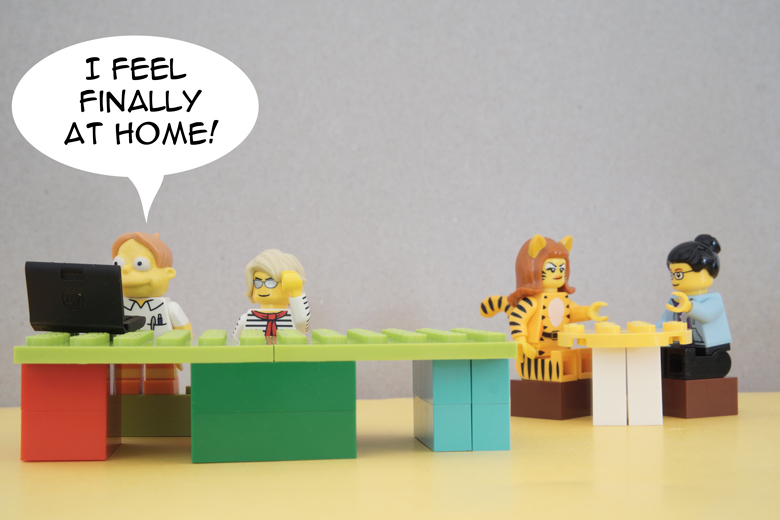 Productivity, versatility, efficiency, control, and comfort: they are the main reasons why I’ve chosen to build and configure my entire development environment. A couple of months ago (June 2020), I decided to write a whole book explaining step by step how to build a mouseless development environment. It changed my life, as a developer, and I would love to pass on the knowledge I’ve got from this experience.

Don’t listen to people who never tried Vim saying that it’s the most complicated thing on Earth. Don’t listen to them arguing that Arch Linux will crash even more than Windows 95. I used both intensively; I’m sure they didn’t.

This kind of environment asks for a bit of time and efforts to setup and understand. A couple of weeks. Then, you’ll have your own development environment, tailored for your present and future needs. You’ll feel in control. You’ll feel at home.